The First Fleet was a group of eleven ships that brought convicts to New South Wales in 1788. Before this England had sent convicts to colonies in North America. When the colonies in North America became an independent nation, the United States of America, the British Government needed to find a new place to send its convicts. They decided to send them to Botany Bay in New South Wales and set up a penal colony.

Australia in the 1780s Good general information about the First Fleet and conditions in Australia from My Place website.

Overview of the First Fleet

First Fleet Timeline Trace the journey of the First Fleet.

Provisions on the ships in the First Fleet Find out what they brought with them on the ships.

Tales from the First Fleet Search the State Library of New South Wales First Fleet Collection for journals, letters, drawings, maps and charts created by those who actually travelled with the First Fleet.

In the 1780's there were no cameras, so the only way to make an image was to draw or paint it.

So the way we can tell what Sydney looked like to the people from the First Fleet, is by looking carefully at the paintings and drawings they made.

Click on a painting below to go to the Natural History Museum with lots of scenes of early Sydney as well as drawings of the indigenous people living there at the time and strange animals and plants that we know, but look a bit odd because the artist was seeing them for the first time. 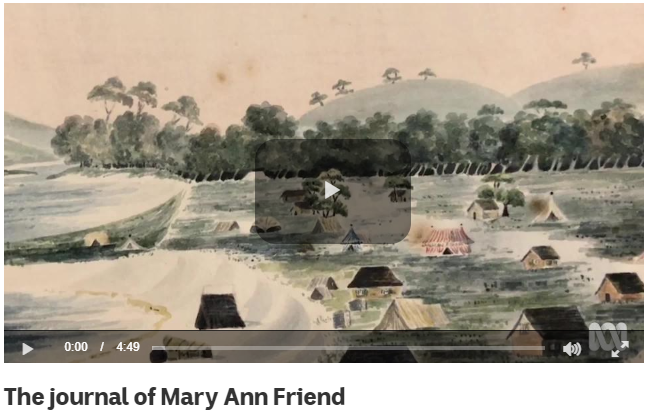 Mary Ann Friend was the wife of Matthew Friend, who captained the Wanstead. She wrote about the Swan River Colony during her visit in 1831.

In this video, State Library of WA Battye historian Dr Kate Gregory talks about Mary Ann Friend’s humorous accounts of life as a female in the early colony – she describes Fremantle as a "circus town" and curses the sandflies. 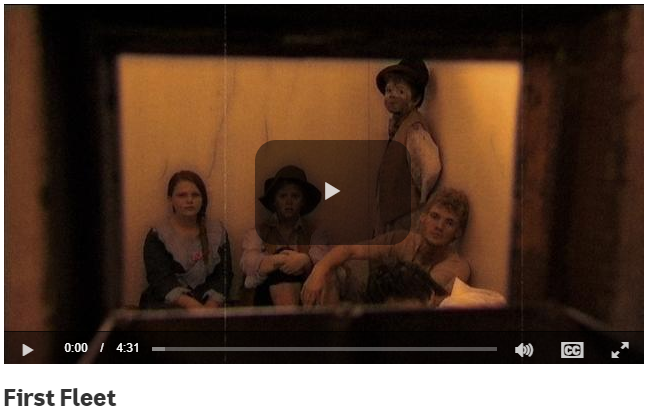 Discover the real life stories of some of the child convicts on the First Fleet. Produced by BTN.

The story of the first fleet, under the command of Captain Arthur Phillip. It begins in England with the British government desperate to alleviate their overcrowded prisons by establishing a new colony at Botany Bay. With the hardships faced by the fleet, it was one of the greatest maritime expeditions ever. Filmed on location in Portsmouth and at the fleet's ports of call. Written and presented by historian Dr Jonathan King in 1988

The following video clips are from the series My Place.

Dance off An Aboriginal camp.

Snakebite How to survive snakebite and how to make a spear.

Water Collecting water and taking it back to camp.

One of the best (and most fun) ways of learning history is to read historical fiction. Check out these titles.

Children on the First Fleet

First Fleet movie
Did you know that when the British colonised Australia, they established a penal colony? In 1787, Captain Arthur Phillip left England with the first group of prisoners on the First Fleet. They arrived in Sydney Cove in 1788. Watch this clip to find out the stories of some of these convicts.